Andalucia is the land of Flamenco, the famous Andalucian white horses, tapas, sherry and some of the best golf on Continental Europe.
The perfect trip for golfer and non-golfer alike. 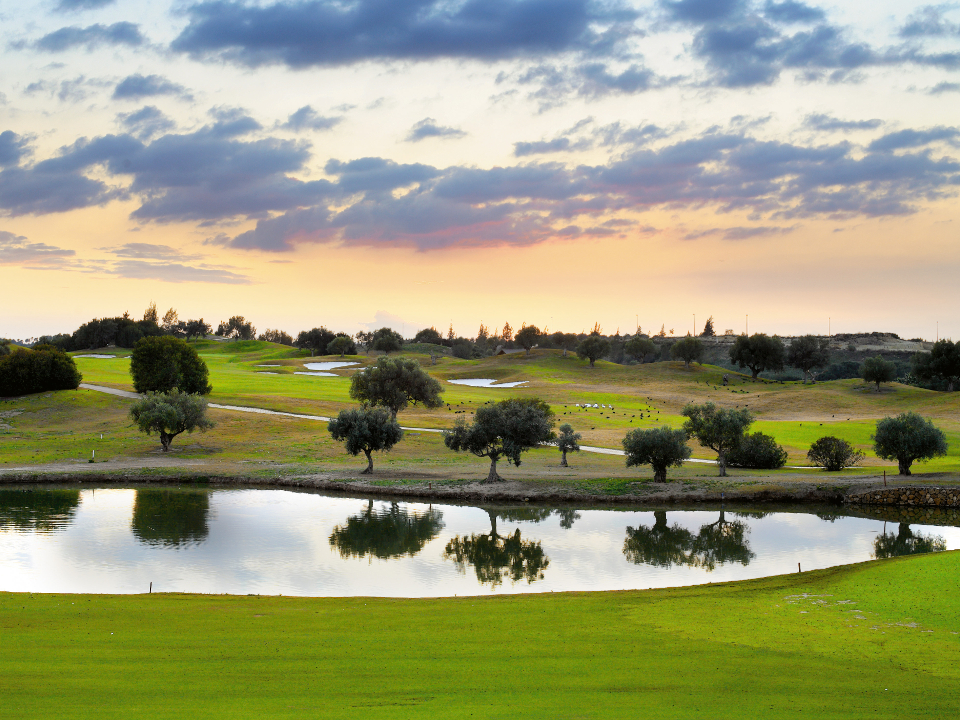 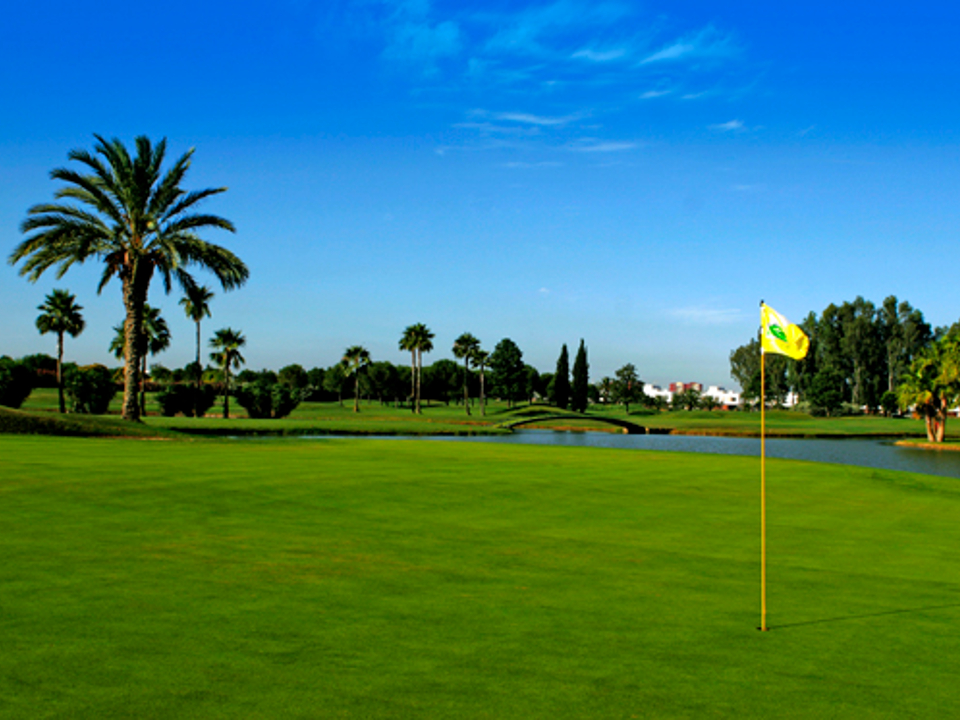 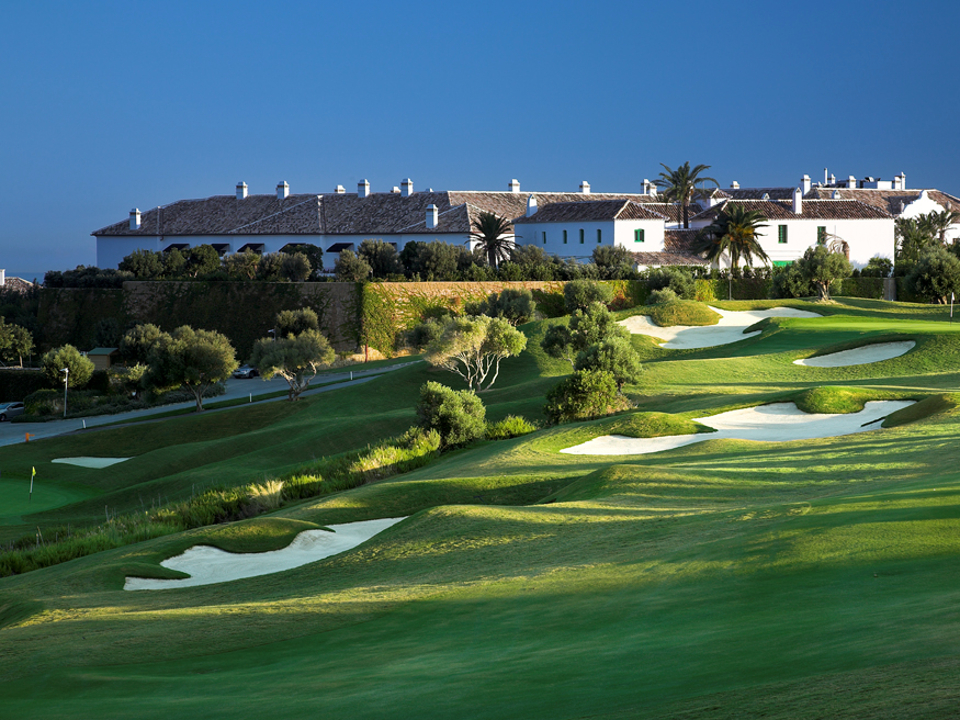 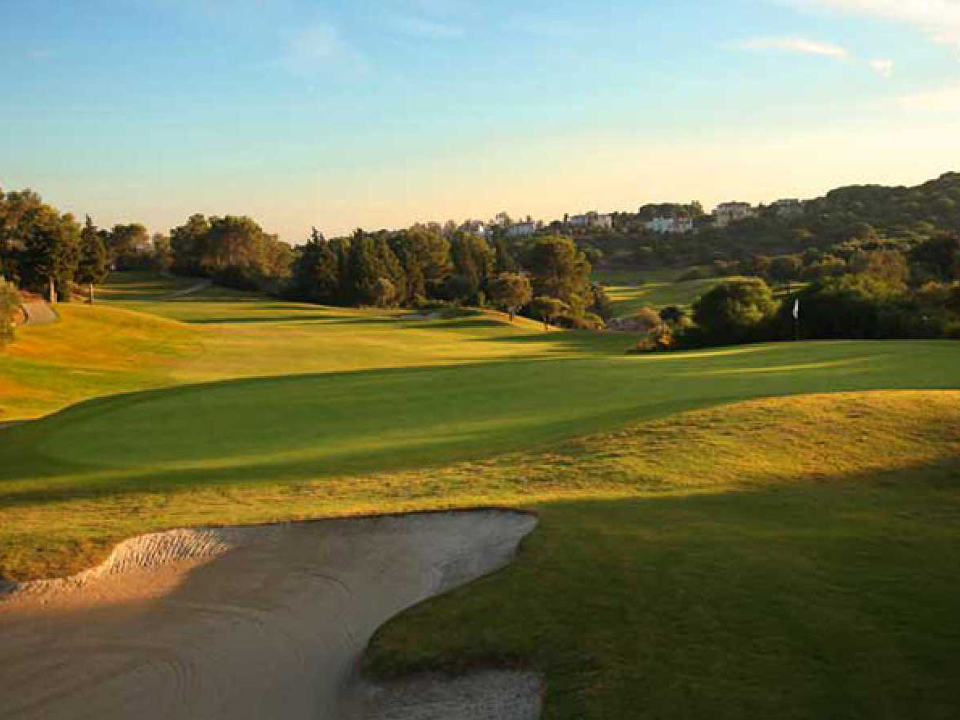 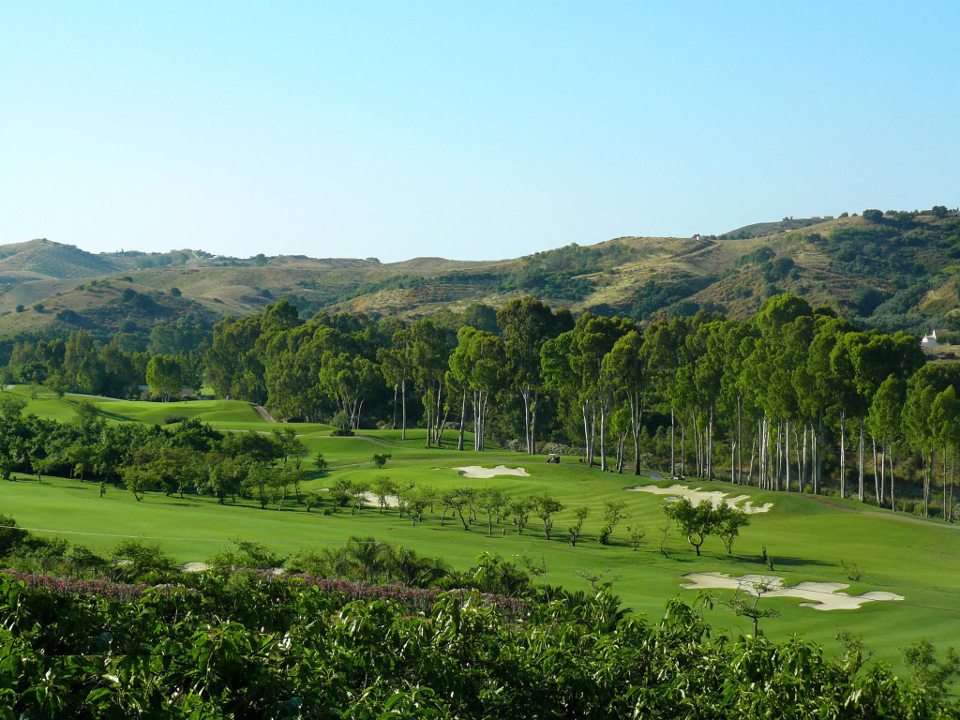 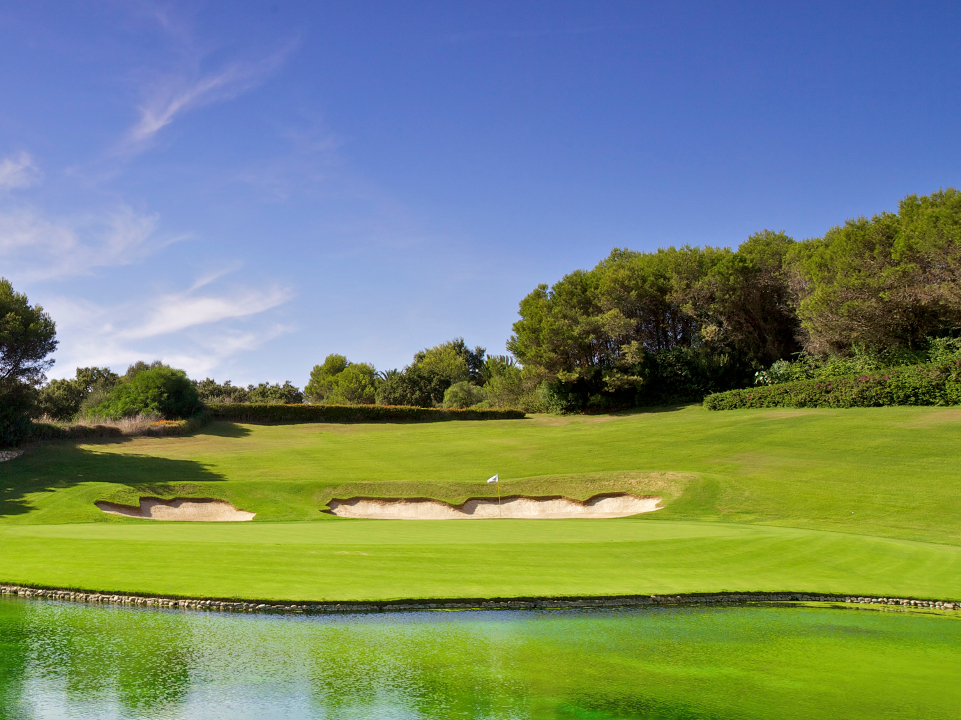 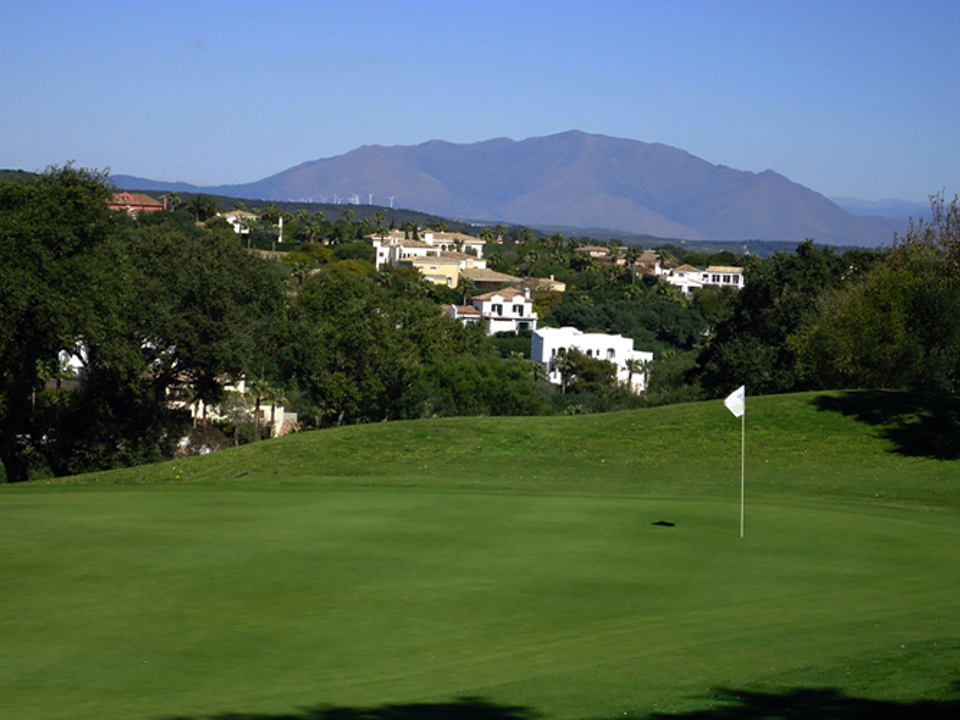 From the ancient city of Seville and the sherry producing center of Jerez de la Frontera, past Gibraltar to fashionable Marbella and on to Andalucia’s capital of Malaga, more than 40 quality golf courses combine with a rich culture and history, to make our Andalucian Golf Escape, the perfect trip for golfer and non-golfer alike. The golf  we have selected consist of some of the best courses in the region  and the sightseeing opportunities are second to none.

Day 2
Play Montecastillo
Jack Nicklaus chose to make his Southern Spain entrée in 1992 with this top class layout, located close to two spectacular Spanish cities, Seville, the historic capital of Andalucia and Jerez de la Frontera, the birthplace of Sherry, Flamenco and home to the, not to be missed, Royal Andalucian School of Equestrian Arts. The course is classic Nicklaus set on a gigantic canvas of wide open space. Huge fairways with greens and bunkers to match and a set up that makes it difficult for most to play to their handicap is reason enough for Montecastillo to be a regular venue for European Tour events.

Day 3
Play Real Club de Golf Sevilla
Jose Maria Olazabal launched the design phase of his impressive golf career with this 1991 layout, which with some fine tuning and the maturity of time, has worthily evolved, rightfully claiming its place among the Royal family of Spanish courses. Not unexpectedly, the course plays to the qualities that Olazabal brought to the game, strategy, the ability to shape shots, working the ball in any direction and of course his forte, the short game. In acknowledgement of its quality and regal status, the course has hosted The World Cup of Golf, and The Spanish Open on several occasions. After golf, be sure to enjoy the congeniality of the Andalucian styled clubhouse atmosphere is most welcoming and the restaurant with its focus on regional specialties is delectable.

Day 5
Play Finca Cortesin Course
Cabell Robinson is a trans-planted American architect who opened his own design company on the Costa del Sol after being responsible for all of Robert Trent Jones Jr’s European projects for a number of years. Robinson is today probably the most respected golf architect in Spain and France, with more quality designs to his name than any other and Finca Cortesin, ranked among Spain’s top 5, is undoubtedly his very best and an experience not to be missed by any visiting golfer. Selected by the European Tour as the venue for the Volvo World Match Play Championship just a year after the course was inaugurated in 2009, then chosen for the honor again in 2011 and 2012, Finca Cortesin has become a firm favorite with the world’s top tour players as well as discriminating amateurs from around the globe. The 5 star luxury hotel located in site (also ranked as one of Spain’s best) is just another reason among the many, to include Finca Cortesin on your trip.

Day 6
Play La Reserva de Sotogrande
This is a big, handsome good-looker and another gem from Cabell Robinson that virtually guarantees an enjoyable round for all levels As always, Robinson has provided multiple tee positions to accommodate everyone from scratch golfer to those who still treat golf as a game. The wide fairways provide every opportunity for the big-hitters to flex their muscles and generous, often multi-tiered greens are filled with their own brand of challenges. La Reserva is a beauty from start to finish, but make sure you have a spare hour or two after golf to relax in the palatial clubhouse and sample this club’s own version of Andalucian hospitality.

Day 7
Play Santana
This is another very intelligent layout from maestro designer, Cabell Robinson, in an especially attractive setting. Very fair to all levels, providing you select the tee positions that match your own abilities and everyone will be assured a most enjoyable time. The fairways are wide enough to give most the chance to take out the driver, providing you avoid the mature trees and numerous, always cleverly shaped bunkers. The sharply contoured and superbly maintained greens bring a bonus level of excitement, likely to be appreciated by all. This is a perfectly balanced course that belongs on every players list.

Day 8
Play Real Valderrama Course
Home to the European Tour’s season closing event, The Volvo Masters, for more than 20 years, legendary Valderrama has gone on to host two World Golf Championships and in 1997, received the ultimate honor of being the very first course located outside of Britain to host the European leg of The Ryder Cup. And the show is far from over. This is the undisputed crown jewel of Spanish golf and for many, the best in Europe – Valderrama enjoys a golfing reputation that is deservedly, second to none. Perhaps the most exclusive private golf club in all of Spain, the members have graciously acknowledged a responsibility to share their golfing treasure with other golfers and accept a very limited number of visitors with 8 times a day starting at 15 minute interval. Immaculately maintained and packed to the gills with a never ending array of serious challenges, this is as tough a test of golfing skills as can be found and one that delivers a sense of excitement like no other. Don’t miss it!

Day 9
Play San Roque Old Course
Two famous members of Britain’s golf fraternity, Tony Jacklin and Dave Thomas, collaborated efforts in 1990 to bring us San Roque’s first layout, a lengthy, testing woodland course with a stadium approach. Immediately acknowledged as an inspired piece of golf architecture, within a year of opening it was hosting the Spanish Open and has never looked back. Very long off the back tees, the challenge is compounded by tight fairways on the front nine. There is no shame in double digit handicappers playing off the front tees, making the challenge much more manageable.